It’s been over a year since my last post about my hobbies 🙂 Well let’s update you all quickly.

My aquarium has been on the sidetracks lately, it has been growing nicely, I’ve removed most of the plants, except for rotala rotifundia. Thanks to the d.i.y. LED lamp, a pressurised CO2 system, and a regular addition of required ferts the fishes almost ran out of space where they can swim. I’ve just recently been thinking about switching the rotala for some slower growing plants, firstly to diversify the flora and secondly because it got very annoying after a while, that it grew so super fast and I had to cut it every week. As for the residents, there is currently a Betta Splendens inside and some Amano shrimps, all the other fishes were given away, to some other hobyists. So as I said I sidetracked the aquariums a bit.

I’ve lately rediscovered my love of the fountain pens. And I’m sorry to say, no not the really expensive ones, unfortunately, at the moment I can’t afford to be snobbish, yet 🙂 My girlfriend gave me a Parker Vector Stainless for Christmas and I’ve been starting to experiment on bottled ink. My first choice was Rohrer and Klingner Verdigris. Of course, before the ink, the first order had to be a converter. For those of you who don’t know it converts a fountain pen from using cartridges to use bottled inks. Well, I won’t explain anymore, here is the link.

After the converter I then ordered Rohrer & Klingner Verdigris, it writes exceptionally nice, it gives a nice wet feeling to the Vector. 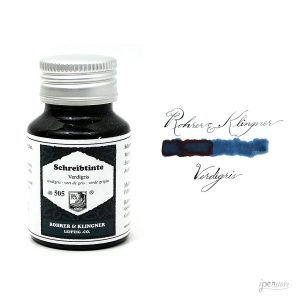 I’ve been onto more interesting things lately, but let’s not reveal everything in one blog post 🙂