Don’t take this post as some kind of bible on how to make a DIY LED aquarium lamp,

I would simply like to expose a way to make a DIY LED aquarium lamp that worked very well for me and my aquarium.

Sometime ago I was presented with a challenge. Getting to know all the rules, tips and tricks of aquaristics it was inevitable for me to get presented with a problem I believe many of us get to very soon after we decide to give in to the beauties of a planted tank. The original lighting in the 54 liter aquarium consists of a T8 fluorescent tube which is 540 mm long and has the power of 14 Watt. Not merely enough to get the plants growing in the aquarium. Especially when the plants are light demanding.

I did some research and found out that the most convenient way to improve lighting conditions (for me) would be a DIY LED aquarium lamp. It has its challenges but it is the most compact and by choosing the right type of LEDs it can make a very significant improvement. Additionally the spectrum can be customized for your needs (red, green, blue LEDs). Of course there is a possibility of installing more than one fluorescent tube. I’ve considered it but the calculation wasn’t in my favor. I would need three or rather four tubes to get to the power of 1 Watt per Liter that meets the demands of the more light demanding plants. I don’t have the space to mount them all. The other con of this kind of solution would certainly be the amount of money I would have to invest. I’d need a bigger reflector for the tubes and other parts that would all together exceed the cost of making a DIY LED aquarium lamp. 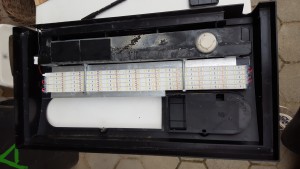 The first step I made was, order a power supply and a LED strip with 5050 LEDs. The light temperature of 6500k.
That was a big mistake. I calculated I’ll need a 2,5 m strip for the amount of water I have and drove them at 100% for 8 hours a day. They fried in about two months. So I needed a better alternative. A working one.

I came across a video on YouTube where the guy used high power 3 W LEDs. I got curious as I’ve noticed the LEDs were soldered on a star board made of aluminum, which made me think about how well the heat must get diffused. I instantly decided to do it this way.

I’ve searched the ebay for a good and inexpensive offer of 3 W LEDs and found a seller that sells all of the components needed for this DIY LED aquarium lamp to work. I was eager to assemble the lamp so I ordered the LEDs. My impatience punished me as I have later noticed that he sells LED drivers and other components after I’ve already received the LEDs from him. I couldn’t bother waiting for another month to get the driver. Impatience, impatience… 😉

So I bought a 12 V / 100 W / 8,5 A power supply, soldered all the LEDs in one series glued them all on the aluminum profile and plugged it in the 220V AC/DC current. It didn’t light up. At all. And then it occured to me. I would’ve needed at least a 34V LED driver for them to get enough power to light up, wired as they were.

I started searching for an easy alternative, with as little change as possible. I’ve decided to power 3 series of 3W LEDs. And here are the calculations I needed to make.

I firstly needed the specs per LED:

The output from the power supply is 12V so the first calculation was 3*LED forward voltage is 10,2V and with my power supply I needed to drop 1,8V. 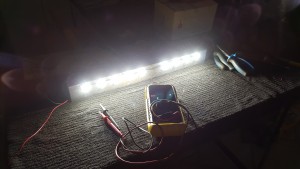 I re-soldered them together in 3 series of 3 with the resistor in line. Then left it on a table plugged in for half an hour, just so I could see how well will it cool. The temperature was getting to around 60 degrees Celsium.

It was all tweaking after that. So now the resistor was holding the LEDs at 700 mA so I dropped the voltage to 11,04 V, by doing this I have lowered their brightness a bit, but prolonged their lifespan (for how long I’ll let you know in a year, two, three).

Hope I helped someone a bit, because when I started planning on making my DIY LED aquarium lamp I had to re-learn a bit of high-school electrical engineering. Somewhere in the middle of it, it all got very confusing for me. So you could imagine how thrilled I was getting it all together 🙂

And the gallery with more pictures below